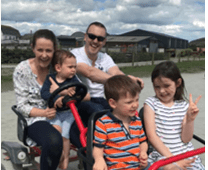 My name is Patrick Dowling. I’m a 43 year old father of 3 and I have antiphospholipid syndrome. My story started in 2011 when I had an episode of what I later learned is called expressive aphasia. During this episode I started talking in tongues. I had visited the bathroom and started to wash my hands. When I had my hands lathered in soap, I didn’t know what to do next. I even considered putting them in the toilet. After a minute or so I figured it out and washed them under the tap. I went downstairs to tell my wife what had happened. I went to say “I was trying to wash my hands” but what came out was “I want to quertle my handles”. For the next 5 minutes or so I couldn’t speak or write properly. I knew what I wanted to say but I just couldn’t say it. My poor heavily pregnant wife thought I was having a stroke and drove me to the hospital where I was tested extensively (MRI, ECG, EEG, echocardiogram before being released a week later with no sign of stroke having been identified. I was sent to a neurologist who performed a great deal of testing. The only test that I had an unusual result in was the lupus anticoagulant test (I tested positive on 3 separate occasions).

Life continued, baby arrived, and all was good. I had a lot of headaches and found I was always tired. I decided it would help if I got fit so I started running. Unfortunately I hurt my leg and after months of ignoring the problem and limping around, I had an arthroscopy to remove damaged cartilage from my knee. Three days after the surgery I felt a stabbing pain in the back of my calf muscle that got much worse when I tried to push my heel to the ground. I was concerned, as it was quite a distance from the site of surgery, so I decided to google the problem and read that it could potentially be a blood clot. I rang my cousin who is a nurse and explained the situation and she encouraged me to go to my GP who sent me immediately to the accident and emergency department. I had an ultrasound of my leg and they found a large venous clot. Later part of the clots would break off, pass through my heart and into my lung. During this time, I was very fatigued and was short of breath. The treatment was injections of heparin and I was placed on Warfarin for the first time. After a week in the hospital, I was discharged. A haematologist later diagnosed antiphospholipid syndrome.

I have been on warfarin for over 5 years now. I take a reasonably high dose (12-13 mg) and my INR is reasonably stable. I get tested every 2-3 weeks at the warfarin clinic and the nurses there do an amazing job. Thankfully they seem to be endlessly patient. I’m not a suitable candidate to be moved to a novel anticoagulant as they aren’t indicated for antiphospholipid.

So 9 years on from the initial problem, my life has changed a great deal. I now have 3 lovely kids Lily (9) Patrick Jnr (5) and David (3) and my days are very busy. I still have chronic migraines which when they are bad can affect speech, concentration, and mood and can make me very sensitive to light. It’s difficult to determine if the headaches are caused by the antiphospholipid or not. Other than the headaches I’m a reasonably fit and healthy husband and daddy who is very happy to still be here.