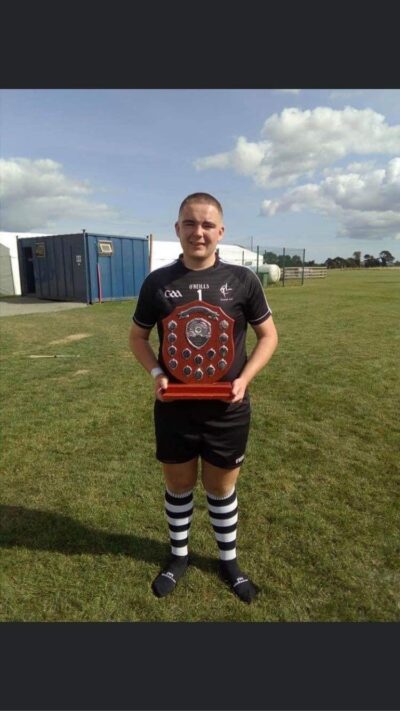 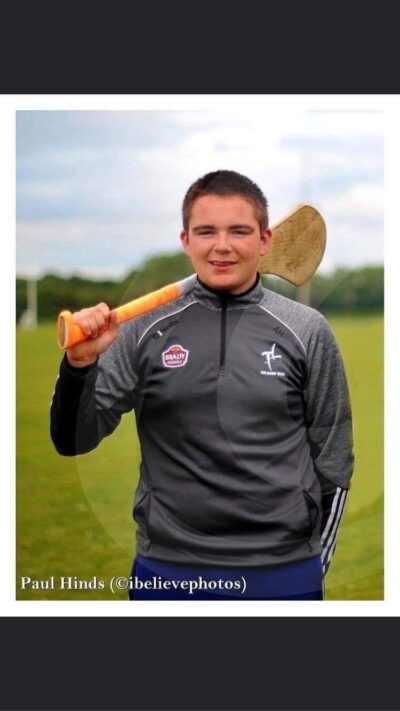 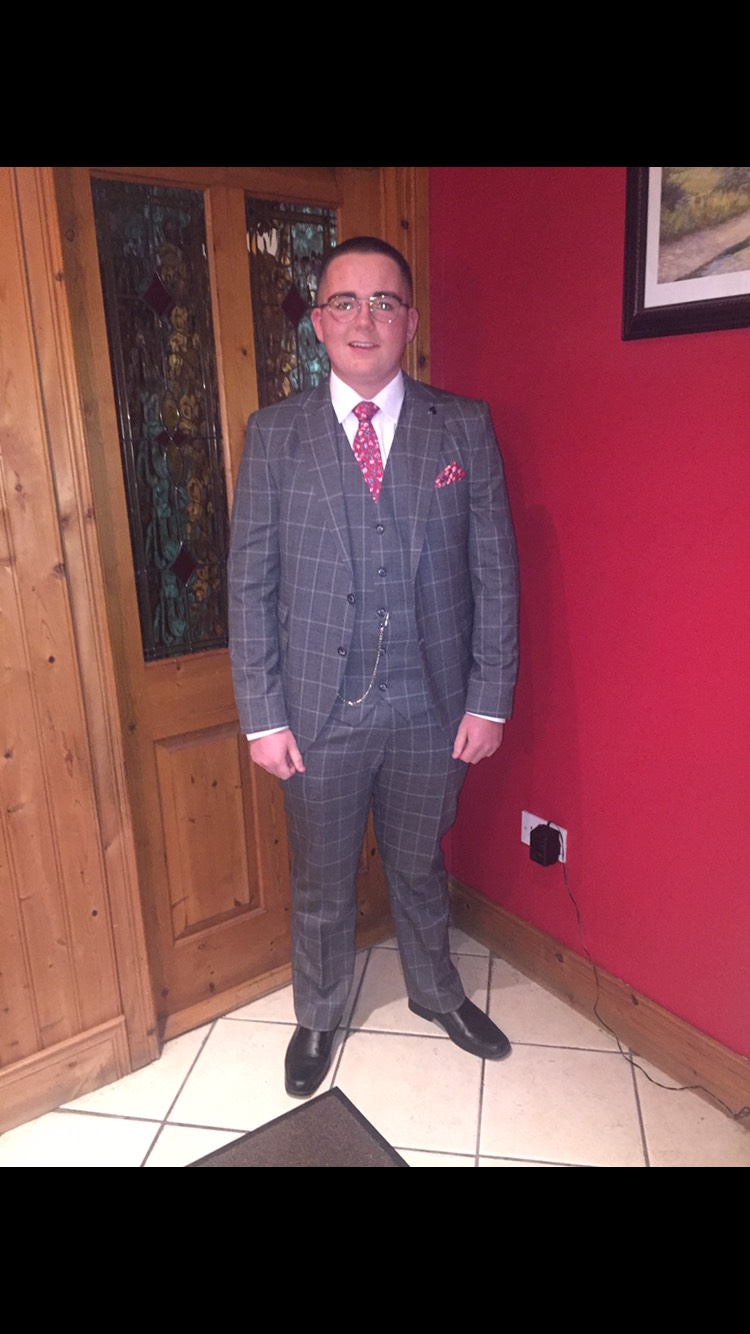 My name is Alo, i received my junior cert results on wednesday the 15th of September 2018. Myself and a few friends went camping to celebrate our junior cert results. I came home Thursday morning and slept for most of the day and that evening I played a hurling match for my local club Rathangan.

I developed a headache and went to the Kdoc ,they thought it was a virus and on friday still no better , contacted the Kdoc again as the pain was the worst pain I had ever experienced. On my way to the Kdoc I got continuously sick and when I arrived they told me there was nothing they could do for me and referred me to Tullamore hospital. I arrived in the A & E and was brought straight to a room where I was accessed and put straight up on a drip and I found that my eyes had become so sensitive to light and felt so dizzy. The doctor suspected it might be meningitis but had to do lots of tests so no positive diagnosis could be made at that time. As i was allergic to Penecillin the Doctors had informed me that drugs were limited for use until they had diagnosis. Nurses were coming in every three hours taking my temperature and blood pressure.

I was moved to the childrens ward at 5am and was sent for a CT scan on Saturday morning, at 6pm I had no results so still did not know what was wrong. All I knew was that all I wanted to do was sleep. On Monday morning my parents insisted on an MRI scan being done which the doctor decided to do on Tuesday morning. My parents were then asked to meet the doctor that afternoon and at this meeting were told that I had a 6cm clot know as Cerebal Sinus Thrombosis. My parents arrived back into the room and I knew something, I could see it in my mothers face. Dr Elbagerie arrived and told me that I had a clot and that it would be treated by warfarin and was also put on antibiotics which made me sleep most of the time.

Two days later I was brought to St James Hospital by ambulance and my parents came along with me and was told I was meeting Professor Harbison, this was my first time in an ambulance and did not know what to expect when I arrived. Professor Harbison was very nice and explained to me all about the clot and told me that lots of my daily things I liked to do were not possible the worst news was that I would not play hurling and that school was also on hold and that I would stay in Tullamore hospital for some time. I was so upset leaving St James as felt my life would never return to normal and just wanted the ground to open and swallow me. I always had one of my parents staying with me and as each week passed I just wished I could get home. I was sent for many tests including seeing the Eye Doctor who told me that I had pressure built up at the back of my eyes which meant I would not be going home in a hurry. Family and friends came to visit and tried to get my spirits up and the nurses were so good. Each day I got warfarin injected into my stomach and one of the nurses told me that if I coughed it would make the insertion of the needle easier. My blood levels were continuously assessed but the days were so long and I had so much time to think , no sport, what was normal life going to be like?

I was told after spending 23 days in hospital that I could go home but would be coming in to Tullamore and going to see Professor Harbison also and was told that if the headaches returned I was to come back in. I was only home two days when I got a great surprise my hurling coach and members of the Kildare hurling team arrived out to see me and they really lifted my spirits and they told me all about training and my coach Eoin asked me when I was feeling a little better to come in and he always kept in informed of everything that was going on and I did go into some of the training sessions it was just devastating not been able to go and play the sport I love, hurling. I continued attending St. James Hospital and going to the warfarin clinic as well. I did get a headache and had to return to hospital but thankfully was only kept overnight as the doctor gave me a cream to rub into the area which he thought would help thankfully it did.

In December, 2018 an MRI scan was organised for me and after that I had an appointment with Professor Harbison which showed the clot had reduced a small amount and doctors were amazed as they had not expected any reduction. I was told that I could return to school but not for full days and the school were informed of that. The school was great they kept in touch with my parents regularly. I was in TY and had missed out on so much but spent what time I could in school. My appointments continued with the warfarin clinic where my bloods were continuously assessed.

In March 2019 a further MRI scan was organised by Professor Harbison and was told that the clot had dissolved, I just could not believe it and of course the first question I asked the doctor was , could I return to hurling which the answer was yes this was the best day of my life as I felt that after six months my life was returning to normal. I was told that if the warfarin had gone out of my system by Friday and that they would do a letter to clear me to play hurling which thankfully it did. I rang my coach and he was delighted to hear of my return little did I think I would play any part in the friendly match against Waterford. This brought a smile to my face back playing the sport I loved and playing for my county. I played the minor hurling championship and we got to the Leinster Semi Final but it was a great achievement as I did not think I would be playing sports again.

I was brought back to St James Hospital as they wanted to try and find the cause of the clot and they took some bloods that day and I got a call four weeks later to return to the hospital where they again repeated the bloods as the first bloods were showing signs of antiphospholipid syndrome. I again had to return to the hospital four weeks later and was diagnosed with this condition which meant I had to return to taking warfarin, I had asked about repeating this test but was told it could not be done again as both tests which were already done had showed signs yet again . I decided that this would be the best decision for me to take warfarin and the safest option but the doctor told me that I could still play hurling and would return to getting my bloods taken in Tullamore to ensure that my INR levels stayed between two and three.

I have been on warfarin for about a year now and it does not affect me that much, the only problem now is I feel the cold alot more. One thing that I have learned from all of this is that whenever you are going through something so bad that you always have to keep positive – don’t get me wrong there were days when I felt really bad but talked to friends and family and also that you always have something to look forward to. I was determined that by the end of April, 2019 I was going to be wearing that Kildare jersey. My family, friends were so important throughout and really helped me to get through this tough time and even though I know I will be on warfarin for life I know now the importance of this as it reduces the risk for me of a further clot.